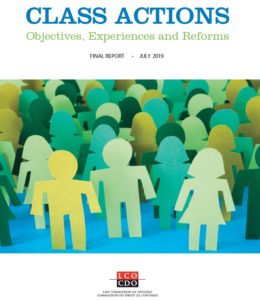 The Law Commission of Ontario’s (LCO) Final Report, Class Actions:  Objectives, Experiences and Reforms is the first independent, evidence-based and comprehensive review of class actions in Ontario since the enactment of the Class Proceedings Act (CPA) in 1993.

Class actions are one of the most high-profile and far-reaching legal procedures in the Canadian justice system.  The CPA was passed 27 years ago.  During this period, class actions have grown dramatically in volume, complexity, and impact in Ontario and across Canada.

The Final Report makes 47 recommendations to reform the CPA and related policies in a broad range of areas.

The Final Report’s 47 recommendations include a combination of substantive and technical amendments to the CPA, significant reforms to class action practice management, the adoption and promotion of consistent best practices in key areas, and major new reporting obligations. The Final Report’s major themes include:

In many areas, the LCO has concluded that the existing statutory provisions and/or judicial interpretations of those provisions are sound and should not be changed.

In the short term, these reforms will improve judicial scrutiny, case management and best practices in individual cases.  In the long term, these reforms will create higher expectations and responsibilities for counsel, promote access to justice and judicial economy, improve outcomes for class members, promote evidence-based best practices, and establish an empirical record to evaluate class actions more thoughtfully.

The Final Report was developed through LCO’s independent, comprehensive, evidence-based and transparent law reform process.  Highlights of the LCO process include: