Defamation Law in the Internet Age 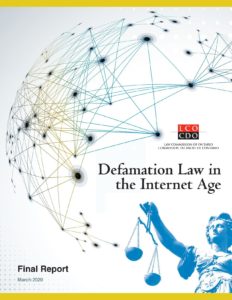 The Law Commission of Ontario’s Defamation Law in the Internet Age project examined Ontario’s defamation laws and how they should be updated to account for “internet speech,” including social media, blogs, internet platforms and digital media.

Prior to the internet, defamation complaints typically focused on newspaper articles, books, magazines and radio and television broadcasts. The paradigm defendant was a professional media organization publishing in the public interest, and subject to professional journalism standards and other checks and balances. The common law of defamation and the Libel and Slander Act developed primarily to address the features of these cases.

The internet has led to new types of defamation claims, including vicious online personal attacks and false online reviews. Deep fakes, trolling, flaming and cyberbullying may all involve attacks on reputation. Online defamation is easily republished and hard to remove. It is also often anonymous, not subject to professional journalism standards and may not involve the public interest.

At present, there is no practical remedy for Ontarians victimized by online defamation.

Traditional defamation law does not provide practical procedures or remedies to resolve many online defamation cases. Court-based litigation is expensive and slow. As a result, practical alternatives are needed to address the problem of anonymous publishers and allow for the resolution of defamation claims “in real time” before extensive reputational harm occurs.

The LCO project involved the most extensive research and comprehensive consultations on defamation law undertaken in Canada. The project culminated in the release of our Final Report in March, 2020. The Final Report makes 39 recommendations to reform Ontario’s defamation laws in a broad range of areas.

The LCO’s major themes/findings include: