The Law Commission of Ontario’s Last Stages of Life project considers how the law shapes the rights, choices, and quality of life for persons who are dying and those who support them. The “last stages of life” is an adopted term that gives the project scope to look at legal issues arising in relation to palliative care, end-of-life care, and medical assistance in dying in Ontario.

The goal of the project is to develop authoritative law reform recommendations based on extensive province-wide consultations and additional advice from an external expert Advisory Committee. The LCO has also developed a distinct process and Advisory Group to engage with Inuit, Métis, and First Nation members in Ontario.

The LCO is currently reviewing the results of our provincial consultation process and formulating draft law reform recommendations. These will be reviewed with key informants over the spring and summer 2020, leading up to the release of a Final Report in later 2020. Should you have any questions contact Ryan Fritsch, Project Lead, at rfritsch@lco-cdo.org.

LCO’s public consultations were conducted between May 2017 to September 2018 and included 73 consultation sessions involving over 800 Ontarians (see below for a detailed list of project milestones). A detailed exploration of the legal issues was provided in an Executive Summary and Discussion Paper. We also summarized these issues in a Consultation Issues Map and brief Issue Backgrounders covering each of the major discussion issues. The LCO additionally published seven research papers commissioned from external experts across Canada (see below for links to each of these).

The LCO established a distinct process and materials to engage with Inuit, Métis, and First Nation members in Ontario. The first phase of that engagement took place with visits to, and conversations with, over a dozen communities and groups between January and June 2019.

What issues are being looked at?

LCO’s consultations heard how the law directly shapes the experience of people in several critical areas that arise in the last stages of life. Each of these are summarized in the LCO’s Consultation Issues Map and brief Issue Backgrounders covering each of the major discussion issues, which include: 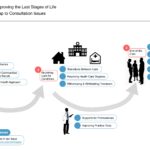