Appeal court judge retires from bench and board 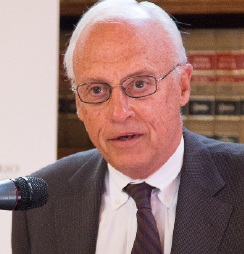 Five years after joining the LCO’s Board of Governors, Justice Stephen Goudge is hard pressed to name a project that hasn’t had a role in creating a more inclusive and accessible justice system.

“The LCO has an enormously important role as a progressive force in the justice system,” says the Ontario Court of Appeal judge. “Through sound research and good communication, it contributes to the conversation about how to make pieces of the justice system more accommodating.”

As he prepares to retire from the bench and his role as the LCO’s judiciary representative, Goudge describes how the LCO has “necessarily grown into the role that it’s now able to play.”

As an independent law reform agency, “the LCO is not beholden to anybody. That’s an enormous strength,” he says, adding this piece of advice for the Board going forward: “The LCO must continue to make shrewd decisions about projects. You can’t do everything everyone would like you to do.”

The LCO also thanks departing Board members Adam Dodek and Nathalie Des Rosiers and welcomes Sonia Ouellet. Says Board Chair Bruce Elman: “The different perspectives of Justice Goudge, Professor Dodek and [UOttawa] Dean Des Rosiers have enriched our Board discussions.”

View all stories from Liaison Spring-Summer 2014