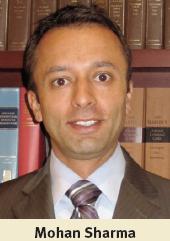 A year from now Mohan Sharma hopes to say he’s had a positive impact on the people of Ontario. As LCO’s new Counsel-in-Residence accountable for the vulnerable workers project, he’s working hard to deliver on his goal.

Sharma joined the Commission last fall, on secondment from the Office of the Chief Justice, Superior Court of Justice. He plans to meet with more than 40 groups representing unions, employers, workers’ community groups, government and academics to get their take on the challenges faced by Ontarians with temporary, part-time, low-paid or insecure employment.

“Few jurisdictions have tackled this issue,” he says. “This is a great opportunity for Ontario to be a leader.”

By year end, the LCO plans to publish an interim report, to be followed by final recommendations in Spring 2012.

View all stories from Liaison Spring-Summer 2011