The challenges which Ontarians experience after family separation often have roots within the economic life of the intact family.  Ontario’s families are highly vulnerable to the economic challenges of relationship breakdown, due to low levels of savings and high household expenses relative to household income.  Individuals who have curtailed labour force participation in order to assume domestic responsibilities within a family face unique challenges if that family dissolves.  Whatever economic arrangements prevail within the intact family, some degree of conflict often accompanies the end of a relationship, and this is another major source of family challenges.

A recent case report tells the story of an Ontario couple who experienced many typical family challenges.[55] The story of their relationship and its dissolution is told below.  Subsequent sections of this paper will make reference to this story, in order to illustrate the nature and impact of family challenges.

Ronald Peters and Beatrice Smith met in 1974, when both were employed by the federal government.  Beatrice was 18 years old at the time; Ron was 27 and had two children from a previous relationship.  Three years later, Ron and Beatrice moved in together and began living as a couple. For the next 11 years, they lived together in various Canadian towns to which Ron was posted by the Canadian government.  In 1988, they got married.  Ron soon received a promotion, becoming manager of workplace a small Ontario town.

Beatrice was still working in another office of the same federal ministry at the time. She fell afoul of the criminal law after taking financial advantage of her employer. She was convicted and incarcerated for theft, fraud, and forgery.  Although this development had an impact on both parties, their relationship survived the blow.  In 1995 Ron and Beatrice moved south, to a larger city. They opened a small print and copy shop.

When they arrived in their new city, Beatrice was 40 years old and Ron was close to 50.  They had lived together for 18 years.  Although Beatrice’s criminal charge was still hanging over them unresolved, they established themselves in a new city and were probably optimistic about becoming entrepreneurs. They also had another reason for joy – Beatrice was pregnant with their first daughter, Sarah.  Sarah was born on Canada Day 1995. Her sister followed almost exactly three years to the day later — June 30, 1998.

Ron and Beatrice devised a schedule to allow them to care for their infant daughters and their infant business at the same time.  Ron, who left the federal workforce after moving, cared for the babies from Monday to Friday while Beatrice staffed the business.  On the weekend, they would switch roles; with Beatrice at home and Ron dealing with the business.  Despite these diligent efforts, the store was never very successful. In 2006, a judge found that it was losing over $10,000 per year, and it subsequently became bankrupt.

In June 2005, Beatrice suddenly moved out of the parties’ home.  She apparently did so without any warning or prior announcement. However, she must have had her reasons for ending a 30 year relationship.

Despite — or perhaps because of — their many decades together and their two young children, the parties were unable to part company amicably. It may be that they had never been very happy; a judge later found an “undercurrent in the evidence of some domestic violence between the parties and a power imbalance in the relationship of the parties.” [56] When Beatrice left the matrimonial home in June of 2005, she took the children with her to a location which she did not disclose to Ron.  Ron did not find out where they were living until the following January.  He had no formal access to his daughters until one year after the separation.  At that time, weekly supervised access visits of one hour in duration began.

Infuriated, Ron responded by creating a series of internet sites and conducting a public campaign against what he alleged were Beatrice’s efforts to alienate the children from him.  He wrote a letter denouncing Beatrice to the principal of the girls’ school, and also created and distributed “press releases” about her and about the parties’ dispute.  The Office of the Children’s Lawyer became involved in the case in 2006, and a social worker from that agency prepared a report which was used at trial.  A social worker from the local Children’s Aid Society was also active in the case.  A six-day trial occurred in late summer 2009, at which neither party had the benefit of a lawyer.  Beatrice did not even formally testify, although she did present her case to the court and had witnesses speak for her.  The central issues in the trial were the parental alienation allegation, child custody, child support, and division of  family property.

The Peters are somewhat indicative of this economic vulnerability of Canadian families , although they were perhaps better off than most. Ron Peters was fortunate, to have a secure pension from the Government of Canada paying $48,306 per year.[57] Beatrice’s income was not disclosed by the case report.  However, the parties worked for ten years to build a business which appears to have consistently lost money and eventually gone bankrupt.  At the time of the judgment, Ron owed over $50,000 to the Canada Revenue Agency and Beatrice owed $26,000 to a credit counselling agency.  After 30 years of hard work, their collective net worth was less than $300,000.[58]

The end of an intimate cohabitational relationship is a time of financial stress for its members.  At the very least, cohabitation’s economies of scale are suddenly lost and transitional costs of establishing new domiciles must be absorbed.  Subsequent sections of this document will describe in detail the financial costs of relationship breakdown and family litigation. The ability of individuals to meet these challenges depends substantially on their economic position before the break-up occurred, and there is evidence that large numbers of Canadian families are already “on the edge” financially and ill-equipped to deal with relationship breakdown.  There is also evidence that the poorest Ontarians (those earning less than $20,000 per year) are 33% more likely than other Ontarians to experience family relationship problems.[59]

Canadians have become steadily more indebted and less likely to have savings, and this trend has persisted through economic recessions, recoveries, and booms.  This trend has reduced the ability of Canadians to draw upon reserves of cash and property in order to cushion the financial blow of relationship breakdown.[60] The following chart, adapted from a recent Vanier Institute report authored by Roger Sauvé, illustrates the steadily increase over time in average debt per household.[61] 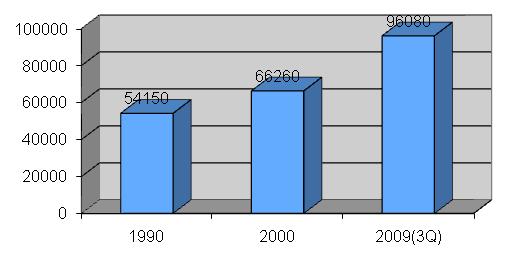 One indicator of the capacity of Canadian households to “carry” this increasing debt is the ratio of household debt to income. This measure reached a new record of 145% in December of 2009.[62]

Turning from net wealth to household income, we find that many Canadian families are “just getting by.”  A key driver of increasing debt loads is the decreasing ability or willingness of the average household to save.  The average annual savings of Canadian households decreased from $7,700 in 1990 to $2,800 in 2000, although it recovered by 14% between 2000 and 2010.[63]  In the third quarter of 2009, the average Canadian household earned $66,200 and spent $63,000.[64]  The Canadian Payroll Association, reporting on a survey conducted in September of 2009, found that “59% of Canadian employees report they would have trouble making ends meet if their paycheque was delayed by even one week.”[65]  Given these financial realities, it is easy to see how the sudden and dramatic costs of relationship breakdown – such as legal fees and finding new housing – can be disastrous for Ontario’s families and their members.

II. B. Sacrifices in Earning Potential Undertaken in Intact Families

As noted above, intriguing scholarly debates surround the role of economic and other choices in family formation.  Economic choices remain highly significant within the life of an intact family. If an individual chooses (or is coerced into) making sacrifices in earning potential while cohabiting in an intact family, those sacrifices give rise to financial difficulties after the relationship dissolves. Family responsibilities often lead Ontarians to make such sacrifices, and this is therefore a post-relationship challenge which has roots within the economic life of the intact family. This section will discuss the nature of individual earning-potential sacrifices, the persistent gender pattern in this phenomenon, and the post-relationship impact of earning-potential sacrifices.

II. B. 1. How Family Life can Lead to Sacrifices in Individual Earning Potential

Sacrifices in earning potential typically take the form of an individual’s (i) choices to reduce participation in educational or training programs which would increase an individual’s earning potential; (ii) choices to voluntarily depart from the workforce, temporarily or permanently; or (iii) choices about where, how, and how much to work while within the workforce which diminish long-term earning potential.  An example of this third type of sacrifice is Beatrice Peters’ relocation between various Ontario towns as required by Ronald Peters’ career.[66]  Even though she worked in the same industry as her partner, such moves probably diminished her earning power.

Simply cohabiting in an intimate relationship may lead to such sacrifices being made.  In Beatrice Peters’ case, for example, they occurred