Over the past decade, a variety of forces have worked to shape Ontario’s labour market. These include the development of a globalized labour force throughout the 1990s, the implementation of neoliberal employment policies during the mid-1990s, and the effects of a global recession starting in 2007.  The overall proportion of Ontario’s population that is in labour force has remained constant during the past decade, though the proportion of those in the labour force who hold multiple jobs, an indicator of low wage work, has shown a steady increase to a high of 12.8% in 2007, and then dropped again to 1999 levels (see Graph 3.1). The unemployment rate in Ontario has fluctuated from a low of 5.8% (in 2000), to the most recent high of 9% in 2009 (See Graph 3.1).[24] 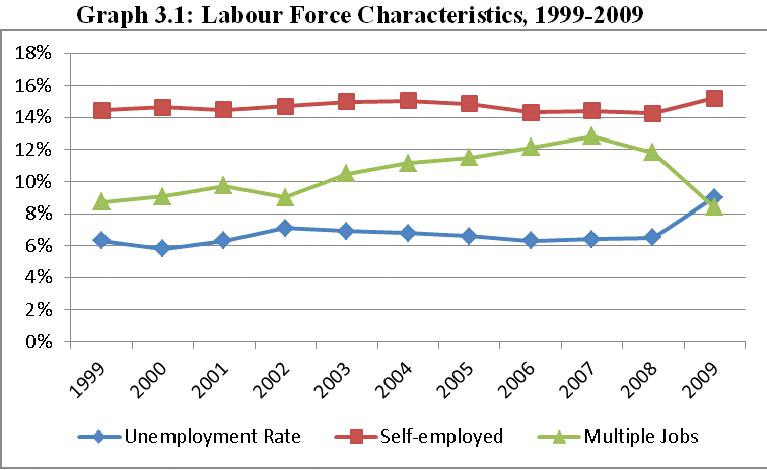 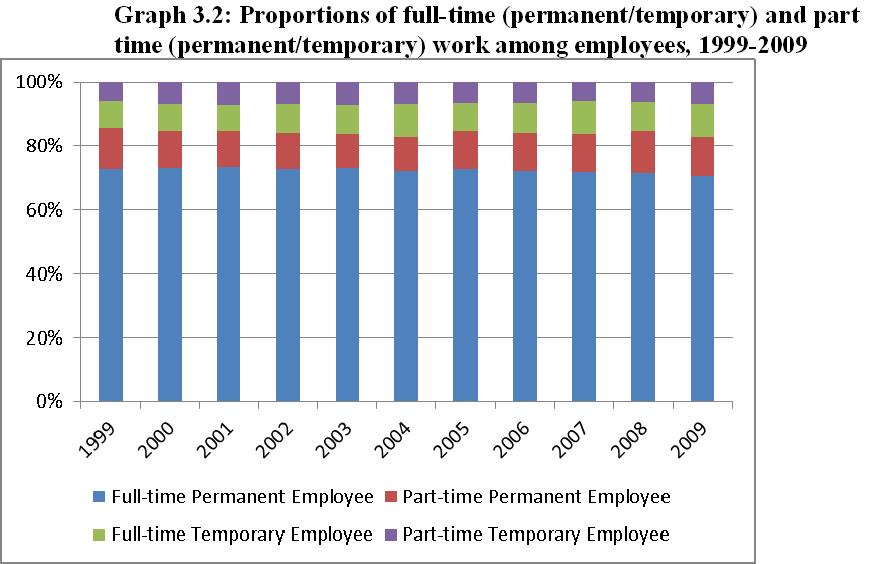 Much like self-employment, the proportion of part-time employment in Ontario’s labour force has also remained relatively constant across time (see Graph 3.2), suggesting that it has been a consistent feature of the labour market over the last decade. Again, women are more likely to hold part-time employment, and this has not changed substantially during the past decade. Similarly, workers with lower levels of education are more likely to hold part-time forms of employment, but this trend has also not varied substantially. In 2008, about a third of workers without a high school education (34.4%) worked in part time jobs, compared to only 11.7% of workers with a university degree.

Since in 2001, workers have been asked about the reasons why they were not employed full-time in the previous year. The most common reason for part-time employment reported is attending school. The next most common reason for part-time employment is the inability to find full-time employment. With some yearly variation, about a third of employees work fewer than 30 hours each week because they are unable to find more work (see Graph 3.3). Not surprisingly, women are more likely to report taking part-time employment because of the need to care for children; in 2008, 9.3% of women gave this reason for working part-time, compared to just 0.8% of men. In contrast, men are more likely to report working part time because they are students; 37.2% of men gave this as a reason for working part time in 2008, compared to only 28.5% of women. Among men, however, we see a steady decline from 1999-2009 in the proportion who work part time because they are students and a corresponding increase in the proportion who could not find full-time jobs. In part, this might reflect an increase in the barriers to accessing post-secondary education; whereas previously those who could not find work may have found it easy to return to school, they may now encounter substantial difficulties financing an education and/or gaining admission in an increasingly competitive post-secondary environment. Interestingly, this trend does not appear for women, which provides further support for the notion that the factors that influence women’s labour force decisions are different than those that influence men’s.

Overall, these results suggest a remarkable stability in the overall structure of the Ontario labour force during the period from 1999-2009. Despite the economic recession in 2007, the distribution of forms of employment has not changed substantially, though it may be too soon for its effects to be apparent. These results also suggest that the changes associated with the implementation of neo-liberal policies may have stabilized by the turn of the millennium, creating a period of relative stasis which might be identified as persistent precarity.