In the conceptualization of precarious jobs, recall that we use four key indicators of dimensions of labour market insecurity: low wages, no pension, no union coverage (i.e., either by a union or a collective agreement), and small firm size. Considering the labour force as a whole, amongst these four indicators, no union coverage is the most predominant in Ontario (see Graph 4.1). In 2008,[28] approximately three out of every four workers (73.5%) lacked union coverage. This trend has remained relatively consistent across the past decade, despite changes to legislation weakening collective bargaining overall.[29]

The next most prevalent indicator of precariousness is the absence of a pension plan. Just slightly less than half of workers report that they have no access to an employer sponsored pension plan, and this proportion has remained relatively consistent over time. The fact that half of all workers lack pension plan coverage makes the current concerns over the Canadian Pension Plan, also asserted by a 2008 provincial taskforce on pension reform,[30] even more pressing, as many retiring workers will not have access to additional retirement income beyond their own savings.

Following closely behind the lack of access to an employer sponsored pension plan, about a third of all workers are consistently in low-wage jobs, despite the changes in the minimum wage (and consequently a changing assessment of low-wage work) across the past decade. 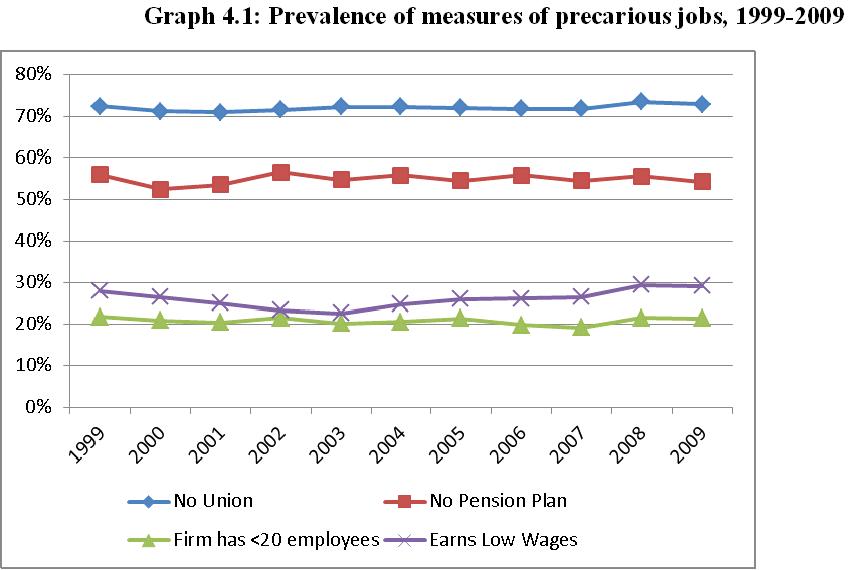 The least prevalent measure of precariousness is working in a small firm – indeed, only about one in five employees work in firms of fewer than twenty people in Ontario. Again, the proportion of Ontarians working in small firms has remained consistent across the past decade.

One element key to understanding and mitigating precarious employment involves discerning how these different factors cluster together. In 2008, about one in five workers (20.3%) held jobs characterized by none of these indicators of precariousness. The Venn diagram shown in Figure 4.1 shows the (non-proportional) overlap between different aspects of precariousness for individual jobs/workers in 2008. The darkest area in the middle of the Venn diagram shows that 8.3% of all workers are in a job with all four indicators of precariousness; that is, their job has low wages, no pension, no union, and is in a small firm. The most common indicator of precariousness in isolation from the others is no union coverage; about 20% of workers overall have no union coverage, but have relatively high wages, a pension plan and work in a large firm (see Figure 4.1). In contrast, workers who are in a small firm are likely to also have no pension and no union coverage. Similarly, workers who earn low wages are likely to also have no pension and no union coverage. Interestingly, it is rare for workers to only have no pension; this phenomenon is most common in conjunction with the absence of union coverage and/or low wages. 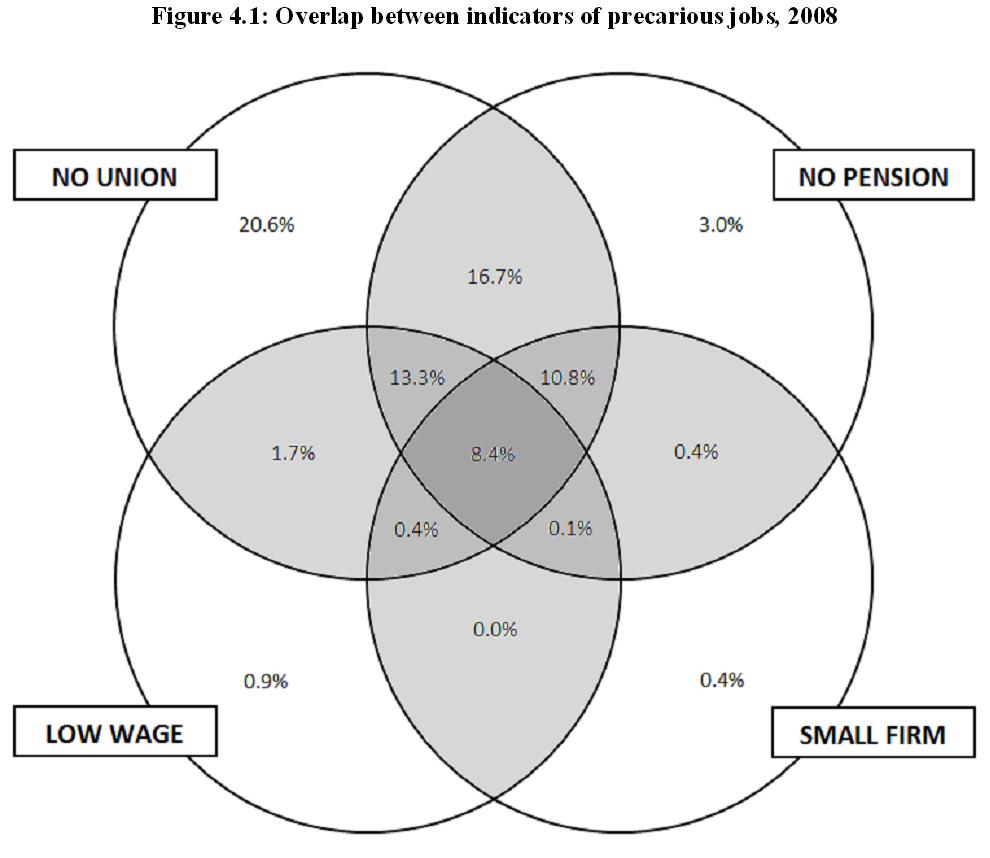 Overall, workers with three or more characteristics of precariousness are deemed here to be in precarious jobs. These overlapping areas are indicated by the two darkest shades in the Venn diagram in Figure 4.1. We can see that the most common combination leading to a designation of a ‘precarious job’ is having a low wage, no union coverage, and no pension (13.3%). The next most common combination is having a no union coverage, no pension, and working in a small firm (10.8%), followed by having all four indicators (8.4%). In 2008, about a third of workers (33.1%) – more than one-third of Ontario’s labour force – had a precarious job.

An inter-provincial comparison between Ontario and Quebec also shows a remarkable consistency in the proportion of workers in precarious jobs across the past decade in both contexts (see Graph 4.2).[31] The consistency of precarious jobs is not surprising for Ontario, given the erosion of collective bargaining and hence workers’ greater reliance on relatively weaker employment standards regulation since the early 1990s[32] but is more surprising for Quebec given the slower decline of unionization in that context[33] and given especially improved employment standards regulations, including those pertinent to wage levels, adopted partly to compensate for growing precariousness in the early 2000s.[34] These results suggest that, in the context of a persistently structured labour force, labour regulations alone may not reduce the prevalence of precarious jobs, particularly in circumstances where workers lack control over the labour process through the limited provision of mechanisms for collective representation.[35] 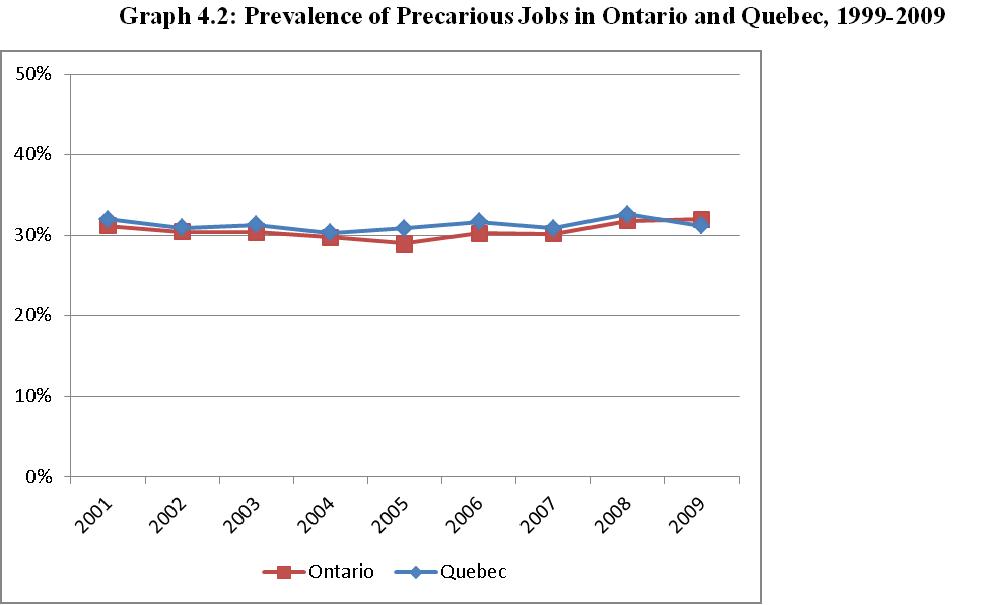 About a third of part-time workers (33.1%) are in jobs that have low wages, no union, and no pension, compared to only 8.9% of full