V. What Types of Jobs are Precarious?

In addition to differences in the presence and absence of labour market insecurity related to forms of employment, there are differences in the prevalence of precarious jobs across the public and private sectors as well as by industry and occupation. These differences also intersect with form of employment and socio-demographic characteristics. As expected, in Canada (as in most other industrial nations), jobs in the public sector, and especially full-time public sector jobs, are least likely to be precarious (See Graph 5.1). In part, the security associated with public sector employment flows from the high level of unionization, which also tends to provide workers with competitive wages, good pensions, and other benefits.[38] Also, public sector employers tend to be large organizations that tend to be subject to extensive employment standards and attentive to their enforcement.[39] Even part-time workers in the public sector are less likely to be in precarious jobs. Overall, women, non-racialized workers, and workers with high levels of education tend to be working in such public sector jobs. 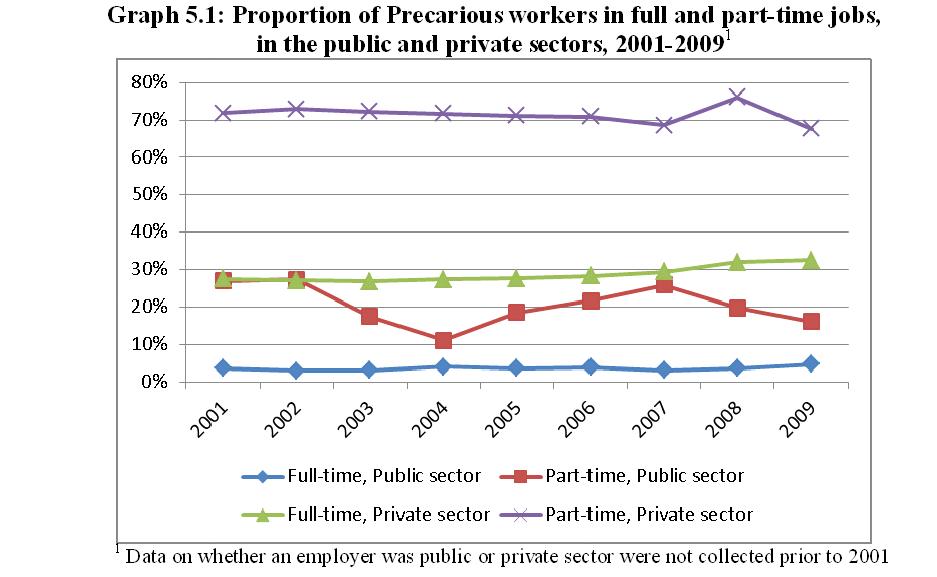 The industry with the next highest level of precariousness over the past decade is agriculture, though the proportion of agricultural workers in precarious jobs as a whole appears to have declined, from a high of 80.5% in 1999 to a low of 64.7% in 2008.[40] In contrast to accommodation and food services, the typical worker in agriculture is a man, with a college or trade certificate or diploma.[41] Although agricultural workers tend to be full-time, almost two in five workers (37.1%) are temporary full-time employees, and thus are likely to lack the non-wage benefits and statutory entitlements that accrue to those that are permanent (e.g., access to employment insurance and employer pension plans where they exist). This outcome reflects the seasonal nature of agricultural work, which requires full (or more than full)-time work in peak planting and harvesting seasons.

The industries with the next highest levels of precariousness are both service industries: ‘other services’ (including repair and maintenance services, personal care and laundry, and civic and professional organizations) and business, building and other support services.[42] Those working in ‘other services’ tend to be women, with a college or trade certificate or diploma – in part reflecting the relatively low value placed on service work associated with so-called women’s skills, such as personal care and caregiving.[43] Women who have recently immigrated to Canada and racialized workers, especially those from Black and Southeast Asian backgrounds, are also over-represented among workers in ‘other services’. Workers in building and business support services are overwhelmingly men, with a high-school diploma. Overall, these industry-specific results demonstrate the relative precariousness of service industries assumed to be ancillary,[44] and the stability of ‘core’ services such as education, public administration, and utilities.

Paralleling the industry-specific findings, the occupations characterized by the highest levels of labour market insecurity are also in the service sector (see Appendix B, Table 5.2). The occupational group experiencing the highest degree of precariousness is chefs, cooks and other workers in the food and beverage industry – primarily restaurant servers.[45] The occupational group with the second highest degree of precariousness is retail sales clerks and cashiers. The profiles of workers in both of these occupational groups are quite similar: both groups are comprised overwhelmingly of high-school educated women. Recent immigrants and racialized workers are over-represented in sales and service occupations, though underrepresented among chefs, cooks and other food and beverage workers. Both occupations are characterized by high levels of part-time employment; almost half of all workers in food services (45%) and the majority of workers in retail services (52.4%) are part-time. Retail services also has a high proportion of temporary part-time employment (15.9%) overall, reflecting the use of temporary staff in this sector as a way to deal with seasonal fluctuations in the business cycle.

The occupational areas with the next highest level of precariousness are in primary industries, including forestry and primary resource extraction, as well as some agricultural occupations (excluding labourers). This occupational group consists primarily of white men, although workers in this group have a diverse range of educational backgrounds. Similar to workers in the agricultural industry described above, these occupations are characterized by a high level of full-time temporary employment, reflecting the seasonal nature of much of this work.

An analysis of work by industry and occupation shows how the features of some forms of work – such as service and agricultural work – converge with those identified with precariousness. Furthermore, the gendered and racialized nature of work in these industries and occupations, intersect with the form of employment to result in a situation where some social groups are more likely to be situated in precarious jobs than others.