VI. Who are Workers in Precarious Jobs?

Workers’ social location clearly intersects with form of work to result in an employment advantage or disadvantage for some groups of workers. In the analysis below, we provide an analysis of how precarious employment is unevenly distributed based on workers’ gender, immigration status, ethnicity, education and family status. Overall, you can see that precarious jobs are not distributed evenly throughout the labour force, with women, racialized women, recent immigrants, single parents and those with less than a high-school education much more likely to be in jobs which are insecure in some way (see Table 6.1). In the discussion that follows, graphs on the left hand side show the proportion of all workers in precarious jobs whereas graphs on the right hand side show the proportion of full-time permanent workers in precarious jobs.

Overall, it is clear that women are much more likely to be in precarious jobs than men (see Graph 6.1), although this gender disparity has remained relatively stable over the decade long period covered in this study. This trend relates primarily to women’s greater tendency to work in part-time and/or temporary forms of employment, which have more features of precariousness, than men’s. For some, engaging in part-time or temporary employment may be a strategy responding to the increased demands of child care which often fall to women. Even among full-time permanent workers, however, women are more likely to hold precarious jobs than men (see Graph 6.2): women are more likely to earn low wages (36.7% of women compared to 22.7% of men), to lack a pension plan (58.7% of women compared to 52.6% of men), and to work in small firms (23.5% of women compared to 19.6% of men). 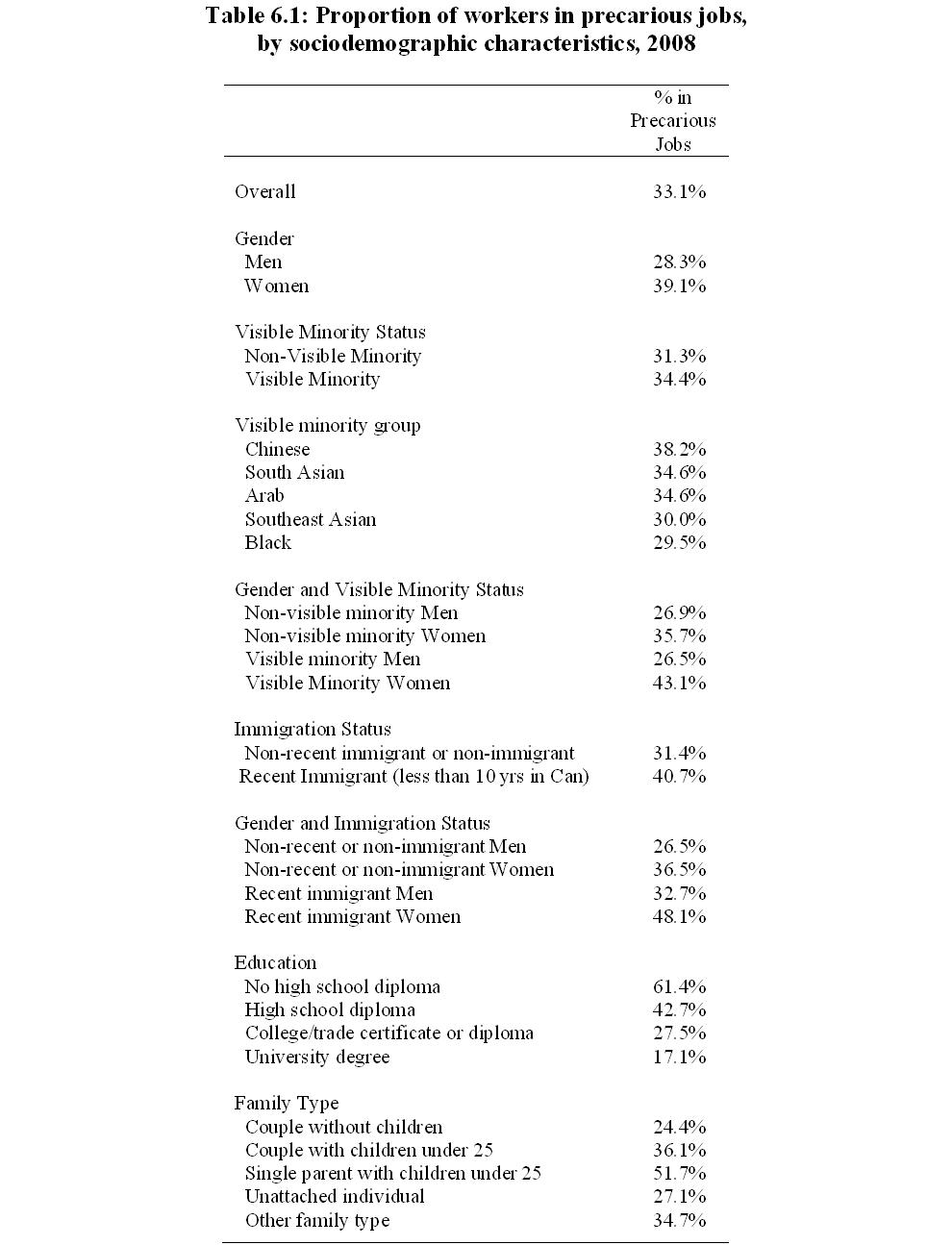 Although the effect of gender is most substantial, racialized workers tend to be slightly more likely to be in precarious jobs than their same-gender counterparts (see Graphs 6.3 & 6.4). In the period from 2002-2007 in particular, workers from Arab backgrounds were considerably more likely to hold precarious jobs. In part, this trend might reflect the overall increase in discrimination against those from Arab backgrounds as a result of the cultural discourses and practices related to race which emerged following the attacks on the World Trade Centre in September 2001. Among full-time permanent workers, members of racialized groups are more likely to earn low wages (22.9% compared to 14.0% for non-racialized workers). Racialized women are at a particular wage disadvantage, with a third of racialized women (33.2%) reporting low wages, compared to 18.7% of non-racialized women.  Low wages are also notably prevalent among workers from Chinese and Filipino backgrounds, with about a third of full-time, permanent employees in each of these racialized groups earning low wages.

There is also a clear relationship between level of education and being precariously employed in Ontario. As expected, those with lower levels of education are more likely to be in precarious jobs