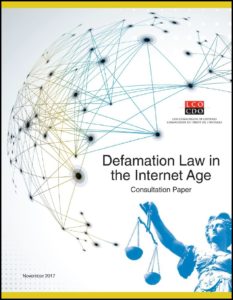 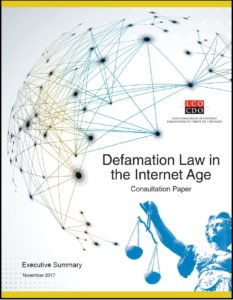 A. The Law Commission of Ontario

The Law Commission of Ontario (LCO) is Ontario’s leading law reform agency. Our role is to conduct research, undertake public consultations, and develop reports and recommendations to improve the effectiveness, relevance and accessibility of the law. Our work promotes access to justice and contributes to public debate. Over the last 10 years, LCO projects have studied and recommended law reform in areas as diverse as disability rights, consumer protection, and vulnerable workers. More information about the LCO can be found at www.lco-cdo.org.

B. Introduction to the LCO’s Defamation in the Internet Age Project

The LCO’s Defamation in the Internet Age project considers whether or how defamation law should be reformed in light of fast-moving and far-reaching developments in law, technology and social values. This Executive Summary accompanies the LCO’s formal Consultation Paper on this project. The Consultation Paper sets out the LCO’s preliminary analysis and questions in this important area of law. Defamation law protects reputation from harm caused by false words. The law tries to balance two fundamental yet potentially conflicting values: protection of reputation and freedom of expression. Both values are important to individuals and the functioning of a modern democracy. Both values are informed by community norms and influenced by the society in which they operate. Defamation law has deep roots. Defamation law originated in the 17th century and the values and norms from that period continue to influence the law today. Ontario’s current defamation law developed primarily through common law supplemented by the Libel and Slander Act (LSA).[1] Matthew Collins has argued that “[a]lmost every concept and rule in the field of defamation law … has to be reconsidered in the light of the Internet.”[2] On one level, the internet has revolutionized how we communicate. It instantly puts us in touch with a potentially global audience and we can, if we choose, speak to that audience anonymously. Publications are also increasingly electronic, whether they are in the form of a traditional media news story, digital media news story, blog or social media post. These developments have understandably had a huge impact on a law designed to regulate expression. Finally, the power of the internet to connect individuals and groups has transformed us into a networked society where communities of shared interests exist regardless of geography. Defamation law in Ontario has not remained static in face of these developments. In recent years, both courts and legislatures have responded to important issues and concerns in order to bring defamation law into the internet age. This approach, while obviously an effective means of addressing specific defamation issues, is not a comprehensive response to the far-reaching challenges posed by “internet speech.” This project is designed to meet that challenge. The LCO’s project is the most comprehensive analysis of Ontario’s defamation law framework to date. It is designed to analyze the underlying purpose and function of defamation law and to update the law to reflect the social and technological developments that will continue well into the future. The issues addressed in the project and the Consultation Paper include:

The answers to these issues are neither obvious nor easy. Nor is there a consensus among lawyers, governments, the media, civil society organizations, or others about how they should be addressed. The LCO’s Consultation Paper asks important questions about these issues and seeks comments and advice from a broad range of individuals and organizations, including complainants and defendants in defamation actions, traditional and new media organizations, defamation lawyers and academics, government, members of the judiciary, advocacy organizations, internet intermediaries, online review businesses and other web platforms and others. The Consultation Paper is part of a comprehensive research and consultation process that involves public consultations, qualitative studies, commissioned research papers, forums, an international conference and other events. More information about the project can be found at the end of the Executive Summary, in the Consultation Paper, and on our project webpage at http://www.lco-cdo.org/en/defamation-law.

C. How to Get Involved

The LCO wants to hear from all Ontarians interested in the issues in this project. Some of the questions raised in this Consultation Paper involve technical legal rules and will be of most interest to lawyers and academics. However, this project is also about some important issues that affect any Ontarian living in the internet age. There is no need for legal training to respond to the Consultation Paper. The LCO encourages all Ontarians to consider these issues and provide us with your input. The Questions for Consideration listed in this paper are a guide to the issues identified by the LCO at this point in the project. We welcome everyone’s input on these or any other issue Ontarians believe is important. Please send us your input by March 30, 2018. There are many ways to contribute. Please contact the LCO through any of the following methods: Law Commission of Ontario Osgoode Hall Law School, York University 2032 Ignat Kaneff Building 4700 Keele Street Toronto, ON M3J 1P3 Telephone: (416) 650-8406 Fax: (416) 650-8418 Email: lawcommission@lco-cdo.org Web page: http://www.lco-cdo.org/en/defamation-law Twitter @LCO_CDO The release of this Consultation Paper launches an intensive five-month period of public consultations, during which we encourage input from all members of the public interested in these issues. During this period, we expect to hold several focus groups in concert with our community partners. We will also conduct interviews and meetings with a broad group of individuals and organizations. The LCO will host a defamation conference in 2018, culminating the consultation process. The consultation deadline is March 30, 2018.

The Consultation Paper synthesizes the LCO’s considerable research and background consultations to date. The issues and questions identified in the Paper are neither final nor exhaustive. Ontarians are welcome to make submissions on any additional topic they believe is important to this project.

Chapter Two of the Consultation Paper briefly reviews the existing state of defamation law in Ontario and Canada. This review reveals notable limitations and complexities in Canadian law that suggest the need for law reform. The chapter also summarizes developments in other jurisdictions and identifies at least four general policy options for modern defamation law.

1. What lessons are to be learned from the law and law reform efforts of other jurisdictions on the issues in this project? How applicable are these lessons to the Ontario context?

The LCO’s goal is to recommend defamation law reforms that reflect contemporary values and legal principles in their social context. Chapter Three of the Consultation Paper considers how the legal, technological, and social landscape of 21st century society differs from the conditions at the time defamation law was developed. This chapter begins with an examination of three important legal principles and social values: free expression, reputation and privacy. Chapter Three also considers how defamation law has evolved over the centuries to adapt to new communications technologies. This Chapter considers several features of internet speech that, taken together, are unique and have a significant impact on how defamation law principles are applied. The Chapter further considers how the technological change represented by the internet has affected how Ontarians participate in democratic communities and how Ontarians currently understand and define media.

2. Can or should defamation law reform in Ontario differentiate between the following and, if so, how:

3. Are there new or emerging technologies or issues that the LCO should consider when analyzing the impact of the internet on defamation? What considerations should the LCO take into account to ensure that our recommendations are likely to remain relevant as technology changes? Technological innovation in communications necessarily influences freedom of expression. This influence has never been more apparent than in the emergence of the internet era. Chapter Three, therefore, considers the nature of online expression and its implications for the kinds of claims that engage defamation law principles today.

4. How is our understanding of freedom of expression interests, issues or expectations different in the internet era? What, if any, significance does this have for defamation law reform in Ontario? 5. Has our understanding of truth and falsity changed in the internet era and how should this affect defamation law reform in Ontario? The internet has caused a shift in how society understands reputation. Social norms about privacy have also fundamentally shifted with the rise of social media sites such as Facebook and Twitter as well as ever-present smartphone cameras. In this section, the LCO considers the overlap between reputation and privacy interests in the internet age.

6. Are reputational or privacy interests, issues or expectations different in the internet age? If so, what significance does this have for defamation law reform in Ontario?

Chapter Four – The Legal Elements of the Test for Defamation

The elements of the legal test for defamation were, for the most part, established long ago. They are subject to an extensive body of case law interpreting and applying them to countless cases over a period of centuries. The LCO does not delve into the nuances of specific elements of the tort. Rather, for the purpose of this project, we have two main concerns: the overall balance struck by these elements between protection of reputation and freedom of expression, and how successfully these elements operate in the context of internet communications The LCO’s other focus in this chapter is on the operation of the elements of the tort as applied to the new forms of defamatory communications made possible by the internet. In this chapter, the LCO reviews the various elements that make up the legal test for defamation and considers how the development of the Char