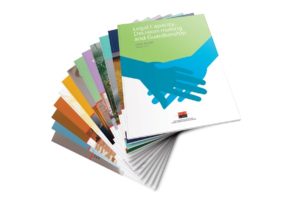 Of the many milestones celebrated in the decade since the LCO published its first law reform report in 2008, Executive Director Nye Thomas says he’s most proud of the way the law reform agency has evolved while remaining true to its founding principles.

“From our inception to today, three things really stand out: our emphasis on broad consultation, not just within the legal community, but with all stakeholders interested in that particular topic. Secondly, we’ve consistently produced practical , authoritative reports on important legal issues. And we’ve accomplished all this while acting independently in the best interest of Ontarians.”

Established in 2007, the LCO published its first report on fees for cashing government cheques in 2008. Twelve final reports followed, including recommendations on how to modernize the Provincial Offences Act and laws governing small estates and employment, and how to divide pensions when couples separate and divorce. The LCO also tackled issues of capacity and established ground-breaking frameworks for developing laws, policies and practices that take into account the realities of older adults and persons with disabilities.

In addition to these 13 final reports, the LCO distributed more than 60 research papers, interim reports and consultation papers. Each is the result of consultations with literally thousands of Ontarians through conferences, focus groups, community meetings, webinars and roundtables.

All told, recommendations from the LCO have contributed to eight provincial Acts, including the Employment Standards Act, the Family Statute Law Amendment Act and the Strengthening Quality and Accountability for Patients Act.

“The Law Commission has exceeded the hopes and expectations of those involved in its creation a decade ago,” says founding Board Chair Patrick J. Monahan, now a judge at the Superior Court of Justice in Toronto. “It has become the leading authoritative source of independent law reform analysis in Ontario and, indeed, across the country. My congratulations to the board, the diligent staff and the many others involved in the outstanding research undertaken in its first 10 years.”

The LCO is in the midst of one of its busiest years yet. Three out of the four projects now underway are due to release final reports in 2019, including the first independent review of class actions in Ontario since the enactment of the Class Proceedings Act in 1993.

The Last Stages of Life and Defamation Law in the Internet Age projects will also conclude, bringing the total number of LCO final reports to 16.

“These aren’t ivory tower products,” explains Andrew Pinto, who began his three-year term as chair in September. “Our reports are grounded in real problems, in real people. The value we offer is in providing solid evidence that governments and other stakeholders can point to as they continue to move the issues forward.”

His predecessor, Bruce Elman, agrees, adding that the number of times the LCO’s recommendations have made their way into the law is not the only measure of the organization’s decade-long impact. “Equally important is the fact that we’ve taken issues of importance to the people of Ontario and thoroughly and objectively analyzed them toward a goal of improving lives.”

Says Pinto: “It’s an exciting time for the Law Commission and I’m committed to ensuring we continue to be seen as an important and authoritative source for really useful law and policy recommendations.”

The LCO has published a special report celebrating our decade of work and impact.