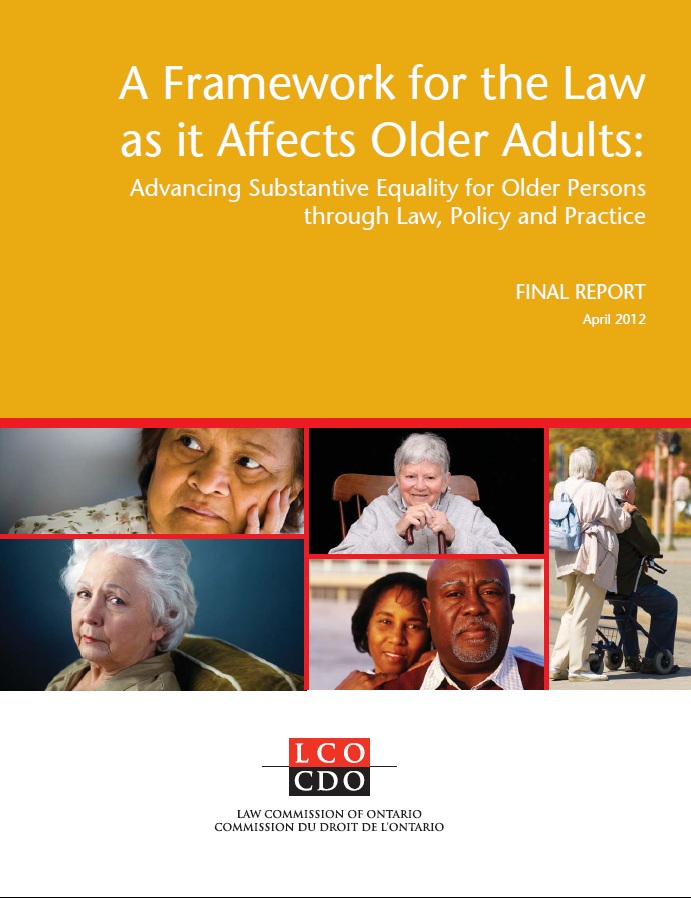 Read about the Final Report Launch!

Although older adults make up a growing proportion of Ontario’s population, law and policy-makers may not be fully aware of or always consider the potential effects of their laws and policies on these members of society. These laws and policies include those that directly target older adults, as well as general laws and policies that may affect older persons as part of the general population. The Law Commission of Ontario (LCO) has created a Framework for the Law as it Affects Older Adults to help evaluate new or existing laws, policies and practices and understand their impact on older adults.

The LCO’s Framework for the Law as it Affects Older Adults can be of assistance to anyone who develops, interprets, implements or assesses laws, policies or practices that may affect older persons, including

The LCO hopes that ultimately the Framework will benefit older persons by making the law more effective, just and accessible.

The Framework is based on a set of principles. These were derived from the LCO’s public consultations and research, as well as building on the foundations created by the National Framework on Aging, the International Principles for Older Persons, the reports of the Special Senate Committee on Aging, the work of the Advocacy Centre for the Elderly and other initiatives.

The Framework is accompanied by an extensive Final Report: A Framework for the Law as it Affects Older Adults, Advancing Substantive Equality for Older Persons through Law, Policy and Practice. The Final Report provides background about the lives of older adults on which the Framework is premised, sets out in detail the principles and considerations that form the basis for the Framework, and provides examples of the potential application of the Framework. It will be of assistance to those who require further information or assistance in applying the Framework.

The Framework was developed through an extensive process of research and consultation. The LCO: